In the sanctuary is a trefoil-headed piscina and a windowsill sedilia.  The Stuart altar table came from Bletchington in Oxfordshire.  The late Elizabethan altar table still stands in the church.  The sanctuary was enlarged in 1883, by removing steps that led up to it, and placing a new brass altar rail west of the south window.  The area was floored with encaustic tiles in a medieval style.  The riddel posts and hangings were installed in memory of Rev. Longe, Rector from 1919 to1939, the wood coming from trees at his ancestral home, Spixworth Hall.

A photograph of a harvest festival at about the turn of the century gives an idea of the east end before they, and the stained glass in the east window, were in place.

The choir stalls were erected in 1883, with medieval poppyheads inserted into the ends of some stalls. One of the original poopyheads has, very unusually, a ‘green man’ at each end.  These are very worn, but the Victorian carvers copied the original at the other end of the pew, giving a good impression of what the original may have looked like.  Although a pagan image, it was popular with medieval carvers, and today his watchful eyes are a reminder of our need to respect and care for the natural world around us.

The east window depicting the Ascension is by William Aikman, 1928, and contains, in the upper tracery, some fragments of medieval glass, including canopy work, a crucifix, a deity holding an orb and one of the orders of angels.  It has been suggested that they may have been part of a window depicting the coronation of the Virgin. 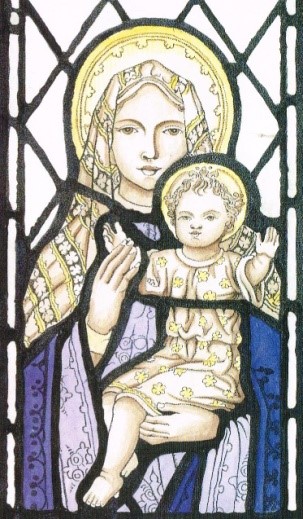 A more recent image of the Virgin and Child fills the small Saxon window high up in the north chancel wall.  This dates from 1937 and in the last few years has become adopted as the church’s ‘logo’.  The illustration here is from a painting by local artist Edward Cullum, who has kindly allowed us to use the image in cards and other materials.

Our church is dedicated to St. Mary the Virgin, and like all other churches in the middle ages it had a statue of its patron saint in a prominent position.  We are fortunate that part of our statue, dating from the  14th century, survives. Although she was cut in half during one of the periods of iconoclasm in the 16th and 17th centuries, we can see that she is seated and holding the infant Jesus on her left arm.  Only the bottom of Jesus’ robe is left.  Her right arm is pointing towards him. The statue is temporarily placed in the rood loft arch, but may one day be restored to her original position.  In 1479 Thomas Wyoth, the rector of Yelverton, stated in his will that he was to be buried in the chancel, ‘before the principal image of the Blessed Virgin there, which stands against the east wall, at the north side of the altar’.

The shallow alcove in the north wall of the chancel is something of a mystery.  It does not go down to floor level, and there is no indication, either internally or externally, that it was intended as a doorway or a window.  One suggestion is that it was intended to take a wooden-framed Easter Sepulchre, an alcove where, in the Middle Ages, the consecrated Host, or wafer, was taken after the service on Good Friday, just as Christ’s body was laid to rest in the tomb.  Candles would be burned before it, and a watch kept, until Easter morning, when the Host would be brought out with ceremony to the altar.

The large archway, now filled with the organ, led through into the chapel, although it may have been closed off by a screen.  In the early 20th century the church had a ‘Positive’ organ, now at Waldringfield in Suffolk, but in 1955 this was replaced by an organ built by E & W Storr, the Norwich organ-builders.

It was quite common for the squire, or major landowner in the village, to have a large pew in a prominent position in the church, often taking up much of the space in the chancel, and the mid-19th century plan shows the position and scale of the pew in this church.

Although our ‘large Jacobean pew’ was demolished in the 1883 reordering, it has not gone completely, as the the panelling was reused for the screen to the vestry and to the tower.  One of the doors into the pew, probably the one from the chapel, seems to have been re-used in its entirety as the door to the vestry, with its original latch and cock’s head hinges. 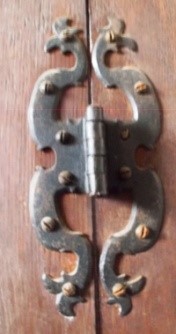